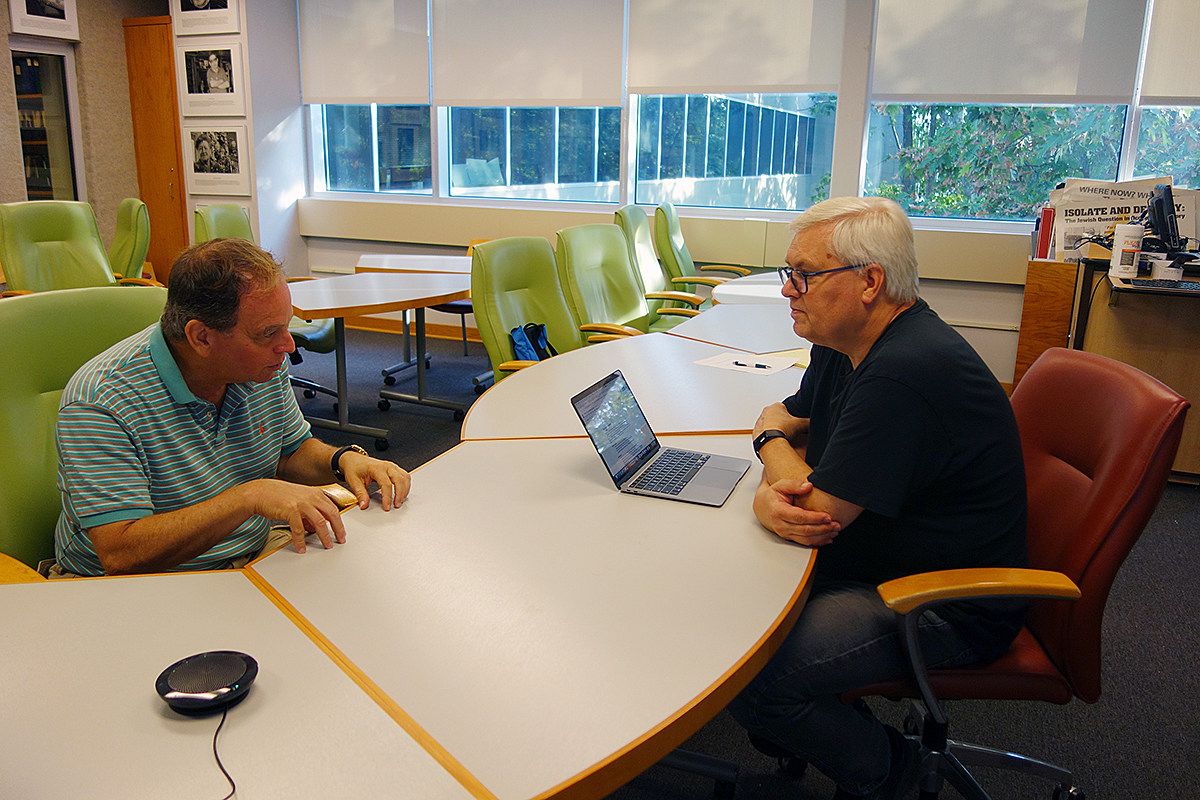 GALLOWAY – When Michael Hayse, a professor at the University of Stockton, and some students started work in 2019 on a project to catalog Holocaust survivors from South Jersey, they thought it would take about a year and pay off a few hundred names.

But three years later, the project continues, and now hundreds of students involved have found the names of 1,500 Holocaust survivors who live or lived in Atlantic, Cape May and Cumberland counties. .

The digital archive of documents, copies of memoirs, and ancestry information is housed at the Sara and Sam Schoffer Holocaust Resource Center at the University of Stockton.

The center opened in 1990, has expanded three times and is in the process of expanding again, said Gail Hirsch Rosenthal, director of the Sara and Sam Schoffer Holocaust Resource Center.

She said the center’s goal was to educate about the Holocaust and other genocides.

“We here in Stockton realized that we had many Holocaust survivors who lived within a 40 mile radius of the school. This means Atlantic, Cape May and Cumberland counties, which is unique,” ​​Rosenthal said.

Two and a half years ago they decided to plan for the future, she said. At the same time, resources were becoming available to Stockton University for the first time.

One was the Arolsen archive, which was documentation available in Germany. Rosenthal said these archives were opened in Stockton through the US Holocaust Memorial Museum. The archives contain approximately 30 million documents from the concentration camps, details of forced labor and records of displaced persons.

“Some of our Holocaust survivors include someone born in Czechoslovakia, whose parents were told they could send a child on a train called The Kindertransport to England. You can only send one. That child is gone and she never knew what happened to her sister and her mother,” Rosenthal said.

Just recently, Rosenthal said Stockton researchers were able to tell the survivor (who has since died) what happened to her mother and sister. They were murdered, she said.

“But she discovered that her sister and her mother were together all the time, which comforted her to know that they were together,” Rosenthal said.

Between 1938 and 1940, the Kindertransport consisted of trains that left Germany and Austria in the nine months before the outbreak of World War II, trying to save as many people as possible from the Nazis. Again, parents were told they could only send one child.

“We found Kindertransport kids who live here near Stockton University and they didn’t even know they were Jewish and on Kindertransport. But we helped them find their archival information,” she said.

With the archives that Stockton has, Rosenthal said they can document and find information for families they never had before. Stockton also has access to 54,000 testimonies from Holocaust survivors and other genocide survivors, through its partnership with the Shoah Foundation at the University of Southern California.

Stockton also has over 60 memoirs of Holocaust survivors from Atlantic, Cumberland and Cape May.

Rosenthal also said there was a project under Professor Wendall White, an award-winning photographer at the Guggenheim, who teaches photography in Stockton where, for more than 10 years, he and students have gone out and taken pictures of survivors and captured some of their stories.

With all of that, Rosenthal said Stockton was able to give students interested in Holocaust studies projects to do and study families.

At the Sara and Sam Schoffer Holocaust Resource Center, Rosenthal said they want students to learn research methods and share their research findings.

For example, speaking of the Kindertransport survivor, Stockton had her memoir. Some Holocaust survivors never testified to oral history, but this survivor did, she said.

They found that throughout the history of these Holocaust survivors, there were themes.
“There were themes of friendship, themes of helping each other, themes of it was no accident that they came here to South Jersey because that is the idea that a person has tell the next one that she had a common history so let’s live together,” Rosenthal said.

She said they never knew it was common for families of Holocaust survivors to live together when they arrived in South Jersey.

Additionally, Stockton researchers discovered the existence of the Baron De Hirsch Fund, which began in the 1800s. It purchased farmland for new immigrants from around the world. Some of this farmland was in South Jersey.

There was also the Jewish Agricultural Society, unique to South Jersey, which offered interest-free loans to survivors.

“We found another trend where we had Holocaust survivors coming here towards the end of their careers to retire and living in the South Jersey area. We also saw the trend that many of our survivors set up businesses in South Jersey that are still operating today,” Rosenthal said.

One such business is the Montreal Inn in Cape May, first operated by Holocaust survivors.

Rosenthal said this project does not stop. As more families get excited about the project, the resource center will continue to add to the archive.

“People we know are coming forward now, and we had no idea they were Holocaust survivors,” she said.

In the fall of 2023, the center plans to release a digital exhibit that will present a more comprehensive look at the Holocaust, refugee issues and the positive impact survivors have had on South Jersey.

Jen Ursillo is a reporter and anchor for New Jersey 101.5. You can reach her at jennifer.ursillo@townsquaremedia.com

KEEP READING: Scroll to see what the headlines were the year you were born

Here’s a look at the headlines that have captured the moment, spread the word and helped shape public opinion over the past 100 years.