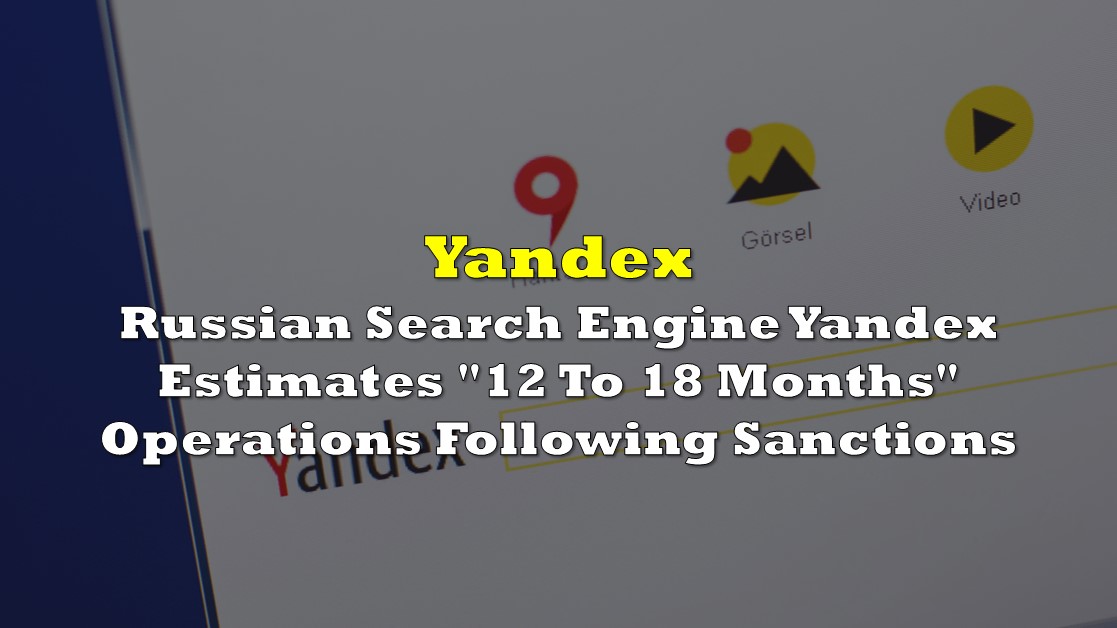 Yandex N.V. (Nasdaq: YNDX) expects 12 to 18 months of “normal course” operation given its current capacity. The Russian internet company has released a statement regarding its outlook following the economic sanctions imposed on Russia.

The company clarified that none of its subsidiaries, board members, management team or major shareholders are targets of the current sanctions. Following Russia’s invasion of Ukraine, the United States, United Kingdom and European Union all took restrictive measures on the country’s economy, including preventing its central bank from selling off its assets. outside.

“We understand, however, that a number of companies based in the US, UK, EU and elsewhere have indicated that they are currently suspending supplies and services to customers in Russia,” the report said. company statement. “We believe that the current capacity of our data center and other technologies critical to operations will allow us to continue operating as normal for at least the next 12 to 18 months.”

If the situation continued or worsened, the company acknowledged that its operations would be “significantly affected”.

This poses a problem for the firm since the Nasdaq Stock Exchange on Thursday suspended the listing of several Russian companies including Yandex. The company currently has US$1.25 billion in 0.75% convertible notes outstanding and due 2025, the holders of which have the right to demand redemption if the suspension lasts longer than five days.

“Yandex Group as a whole does not currently have sufficient resources to fully redeem the notes,” the company said.

While its parent company is headquartered in the Netherlands, the majority of its operations and assets are located in Russia. The firm also predicted that it would also have a “significant negative impact” on the business if speculation of the Russian government taking over businesses in the country materializes.

“Any prolonged economic downturn in Russia as a result of sanctions, ruble depreciation or negative consumer sentiment could have a material adverse effect on our results,” the company added.

However, the company stressed that there are currently no regulatory restrictions for people outside of Russia to acquire and trade in its securities.

As the situation in Eastern Europe ensues, the company pledged it was ready to “take all necessary steps to conserve cash, consider our capital allocation and budget appropriately.”

In its 2021 financial statements, the internet company recorded annual revenue of 356.2 billion euros and a net loss of 14.7 billion euros.

Yandex last traded at US$18.94 on the Nasdaq since trading was suspended.

Information for this briefing was found via Yandex. The author has no security or affiliation related to this organization. Not a buy or sell recommendation. Always do additional research and consult a professional before purchasing a title. The author holds no license.