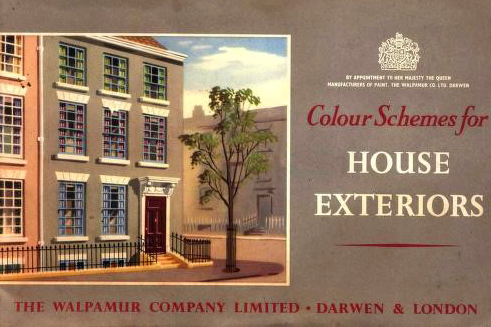 This article is part of a monthly series that explores historical applications of building materials and systems through the resources of the Building Technology Heritage Library (BTHL), an online collection of AEC catalogs, brochures, trade publications, etc The BTHL is a project of the Association for Preservation Technology, an international building preservation organization. Learn more about the archives here.

Although the Building Technology Heritage Library focuses primarily on American documents, the collection has been international since its inception, with a large number of Canadian, English and French documents from the Canadian Center for Architecture in Montreal. For this month’s article, we explore documents from England, some of which are among the oldest records of the BTHL. This survey of English businesses begins in the 1840s and continues by decade to the 1960s. As you might expect, many of the businesses referenced were located in London. However, several of those featured were also located in Birmingham, a major regional center for steel production.

The Industrial Revolution had its origins in the English metal industries, and there are a number of trade catalogs and other records on cast iron, wrought iron and steel. In addition to metal fabrications, the subjects chosen for this investigation include paintings, masonry, windows, toilets, wallpapers and even papier-mâché. The pulp material is not usually associated with the construction of buildings, but from the 18th century in France it was used for architectural ornament and incorporated into plaster interiors and, in the 19th century , the medium came into use in the United States.

Over the past few years, the BTHL has added many records from England thanks to the generous donation of the Miles Lewis Heritage Building collection in Melbourne, Australia. The gift highlights a long tradition of English companies establishing an Australian division and the exchange of building products and practices.

On the use of improved papier-mâché in furniture, in the interior decoration of buildingsCharles Frederick Bielefeld, London, 1842

The use of molded plaster ornaments has a long history, but the production of cast paper versions, “papier mâché”, began in France in the late 19th century. Charles Frederick Bielefeld was the first to produce it there. This is a profusely illustrated catalog of papier-mâché ornaments for interior decoration of buildings as well as artistic applications.

Builder’s Guides are a special subject within the BTHL and this volume from England is a comprehensive example, with over 40 subjects and 300 illustrated plates. There are detailed lists of materials, specifications and costs. The Metropolitan Building Act of 1855, an old building code, is also included as an appendix.

This catalog presents designs of greenhouses that can be made of metal and glass. The Great London Exhibition of 1851 (also called the Crystal Palace Exhibition) brought the metal and glass building to worldwide attention. The smallest example available from this company represents an early version of a pre-engineered building type.

This catalog includes 70 illustrated plates of bricks, terracotta and tiles as well as some pottery. Illustrations of various pressed brick and terracotta pieces are rendered with delicate lines, making each catalog page a virtual “work of art”.

This metal work catalog has many sections on hardware, fireplaces, gaslights and exterior fencing as well as many other architectural items.

Flush toilets have their origins in 19th century England, and this 1894 catalog features highly ornate pottery toilets and sinks, as well as more utilitarian examples in white.

This slim volume includes just 15 wallpaper designs from Studio Morris, and each sample is listed with a pattern history. This catalog was published in 1909 but includes some early designs from 1862, a testament to the enduring beauty of these designs.

The design and manufacture of prefabricated buildings that could be shipped anywhere is a testament to when the English empire spanned the globe. Most of the buildings available in this catalog were rather small like a “cottage” or an “auto house”.

The metal casement window was popular in the early 20th century, and Hope’s Company of Birmingham, England was one of the largest producers. These products have been promoted in the United States as well as in England.

Publications of trade associations that promote specific products are another category of documents in the BTHL. This document features illustrations of buildings from the 1930s in England that featured various aluminum products, or as the English say “aluminum”.

This steel construction manual includes comprehensive tables of dimensional and technical data for a wide range of steel beams, columns and connections.

Color schemes for the exterior of the houseWalpamur Company, Darwen and London, 1950s

This catalog continues a long tradition of paint catalogs that feature color schemes for home exteriors. The building types shown vary from an old thatched-roof cottage to a modern ranch house.